I rode the Pikes Peak Cog Railway on August 11, 1993 and took several photos to record its operation. The cog railroad is a few miles west of Manitou Springs, CO.

Wikipedia says, "The Broadmoor Pikes Peak Cog Railway (also known as the Pikes Peak Cog Railway) was an Abt rack system cog railway with 4 ft 8 1⁄2 in (1,435 mm) standard gauge track in Colorado, USA, climbing the well-known mountain Pikes Peak. The base station was in Manitou Springs, Colorado near Colorado Springs. The railway was the highest in North America by a considerable margin. It was built and operated solely for the tourist trade. As of March 15, 2018, the company has ceased operations for the foreseeable future. They state the entire infrastructure needs to be replaced or upgraded; this includes the rails, the ties, and the passenger cars."

Recent information says it will reopen for the 2021 season with all new equipment, rail, and rack.


Pikes Peak Cog Railway Car 24 at the Base Station. It is a Diesel Hydraulic with a Cummins 855 built in 1983 and carries 214 passengers. I actually rode Car 25, an identical sister to Car 24. 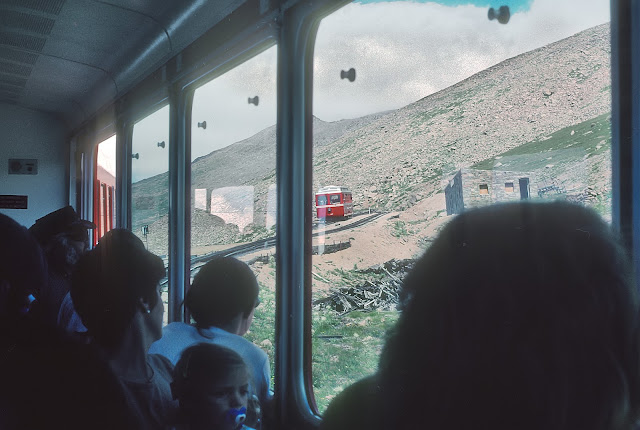 The Railway has passing tracks and runs multiple trains. In this photo we are going up and the car through the window is coming down. 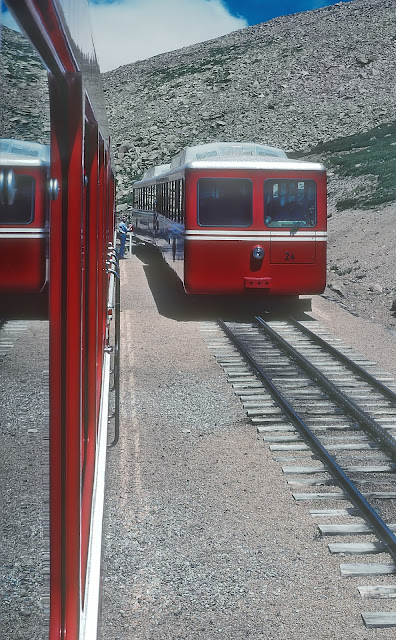 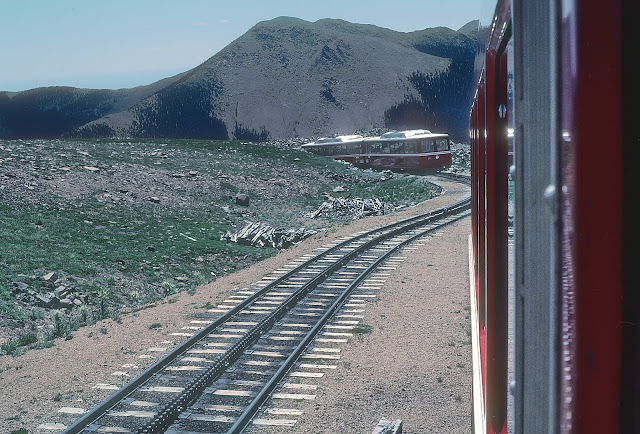 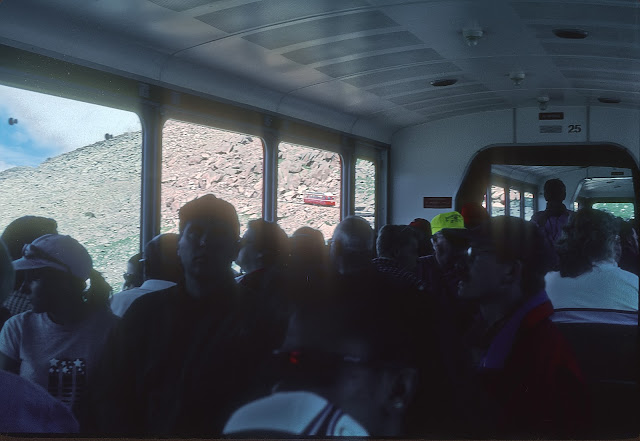 Another meet about to happen. 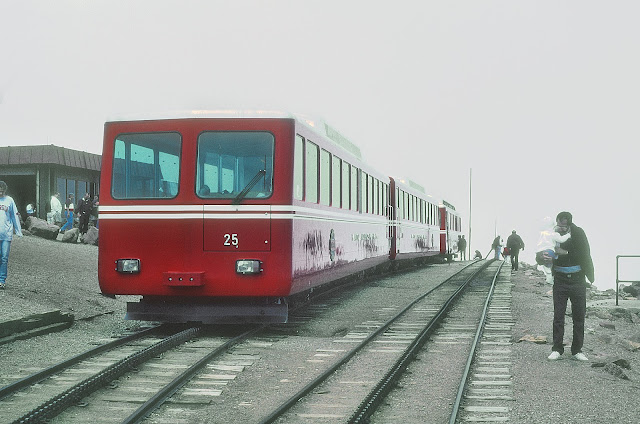 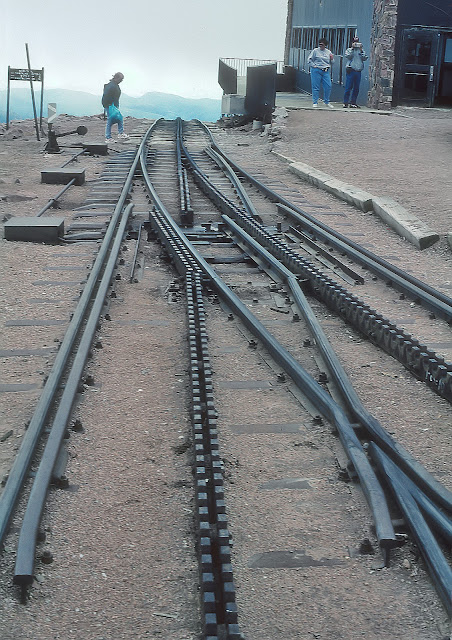 The station at the top has two tracks and thus one switch. We are looking down from next to Car 25 in the previous picture. 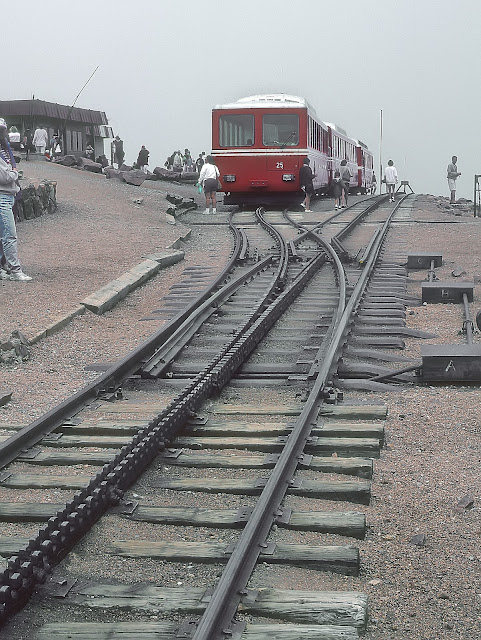 We are looking up at the same switch. 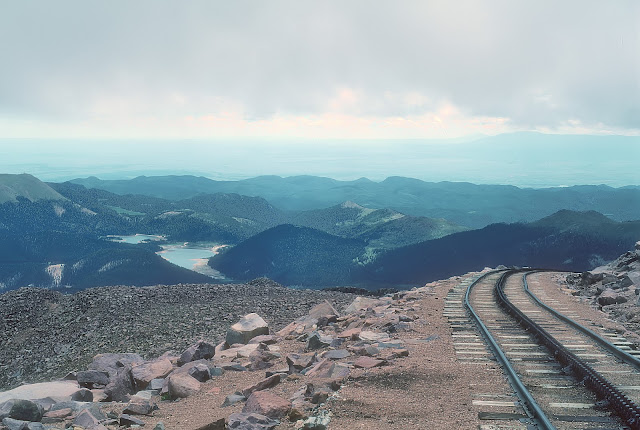 I turned around from taking the previous photo.  The track at the right is the track on which we came up and will return to the base station on it.  I took the shot for the scenery.

This is the builder's plate on Car 25. 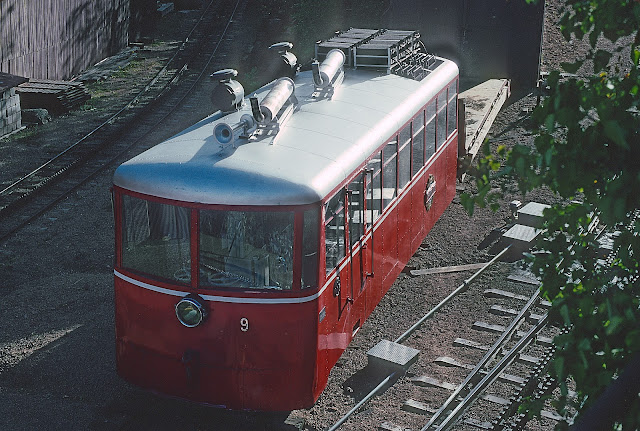 Pikes Peak Railway Car 9 back at the Base Station.  It was a work car.  Looks like a flat car behind it. 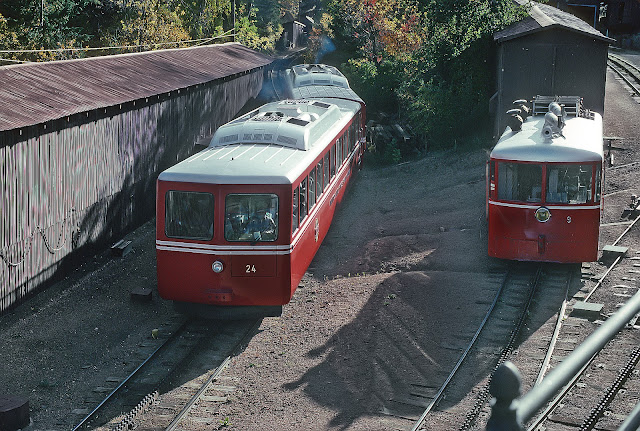 
Posted by Story Behind the Pictures at 4:11 PM