SPUD, Not a Potato, But St. Paul's Train Depot

On Thursday May 14, 2015, while at my daughter's in Minneapolis, she and I visited St. Paul Union Depot, SPUD, by riding the Green Line light-rail to St. Paul and back.  I wanted to see the renovated depot I had known in its glory in the 1960s when I worked for one of the tenant railroads, the CB&Q.  She had used it recently to ride Amtrak's Empire Builder.

Thursday was a dark day with intermittent light showers.  We boarded the Green Line at the Warehouse District Station after a short bus ride from her neighborhood. 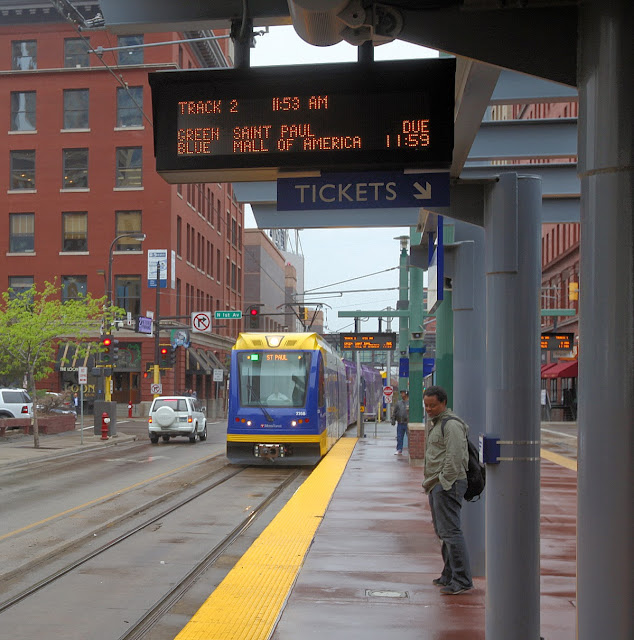 And about 45 minutes later arrived at SPUD, which is to the left. 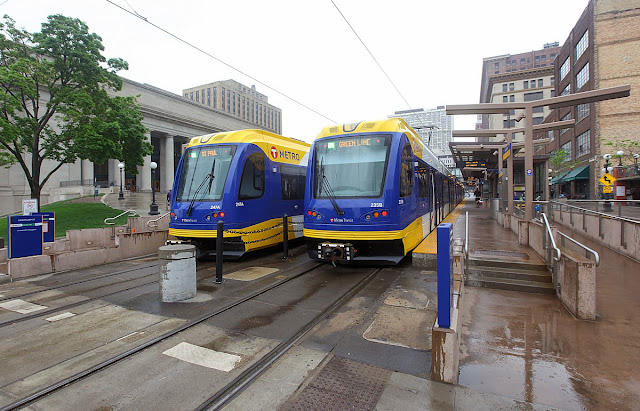 This is looking back from the front of the depot at the light rail station. 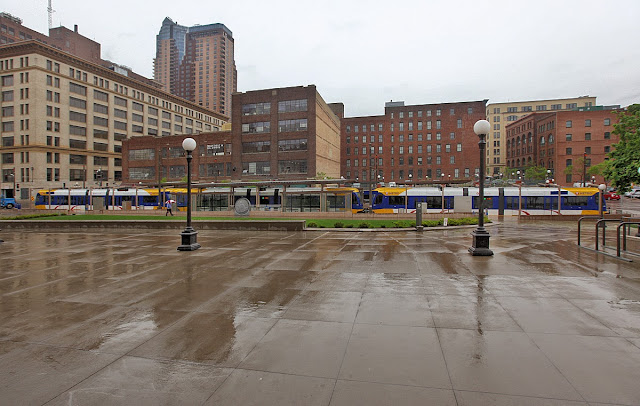 The first SPUD burned in 1915.  The completion of this SPUD was delayed by World War I until 1923.  The renovation took it back to its 1920s appearance. Here is the headhouse in its early years.  The headhouse is one grand room with multi-story wings for offices, meeting rooms, etc.
photo from the SPUD website 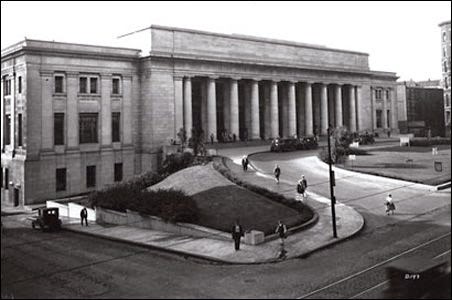 This is the grand room in the headhouse on Thursday. It contains a Greek restaurant (now closed). 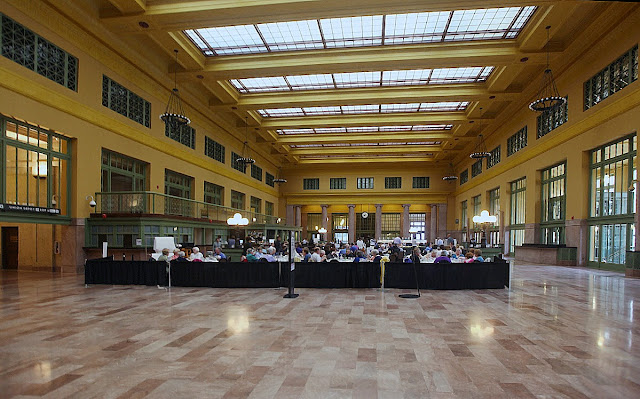 When I first entered the headhouse in June of 1964, it was the waiting room and housed the steam locomotive William Crooks. This 1954 photo is licensed under Wikimedia Commons. The ticket windows are to the right.  Note the "modern" florescent lighting from the 50s has been replaced. 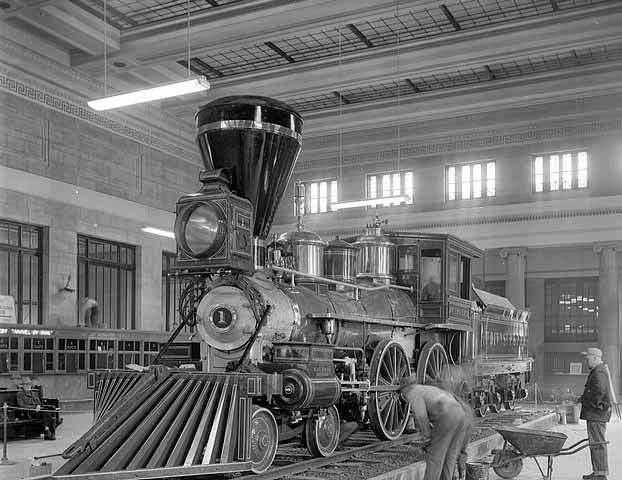 The restaurant uses the ticket windows as a bar. 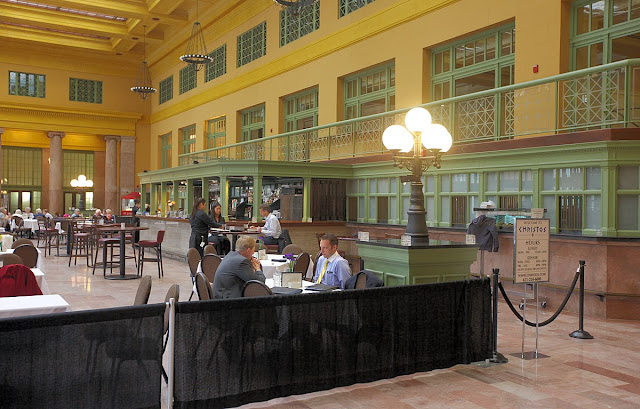 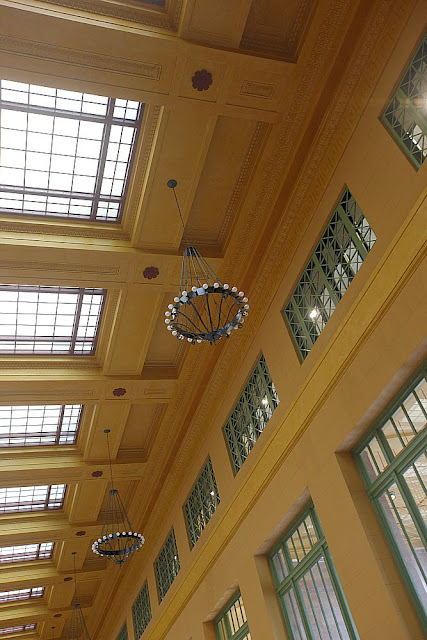 The concourse of the station was above the tracks with staircases down to the platforms between the tracks.  Between the headhouse and the concourse is a wide hall which serves as the waiting room today for Amtrak passengers and intercity bus passengers.  The Amtrak Chicago to Seattle/Portland Empire Builder goes Chicago bound in the morning and westbound in the evening.  Midday Thursday nobody was waiting. 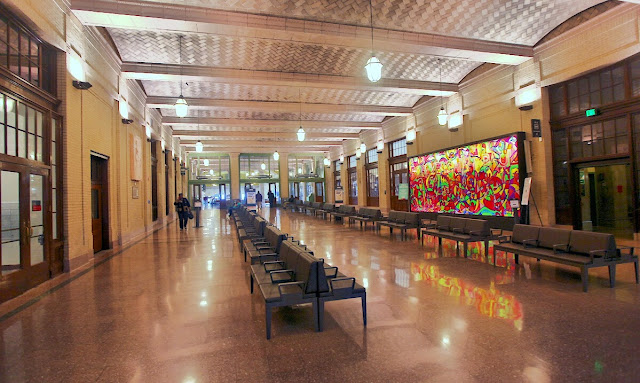 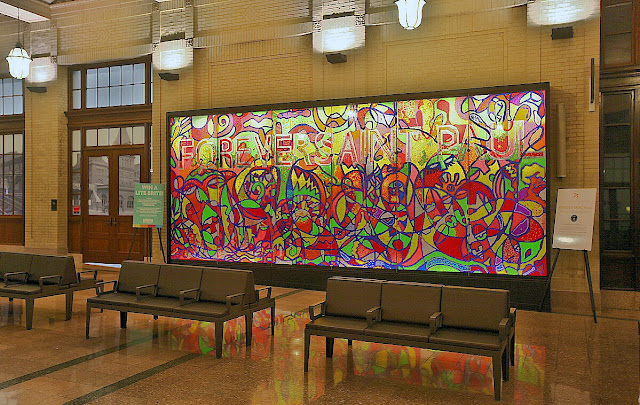 At the end of the hall is the concourse. 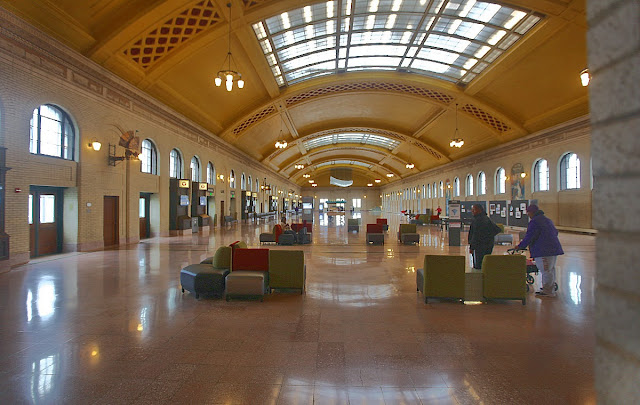 The concourse was above and perpendicular to 9 platforms serving 18 tracks.  During its heyday, the depot hosted the passenger trains of nine railroads, and at its peak in the 1920s, 282 train movements daily according to Wikipedia.  The concourse was also a waiting room.

To the left (east) in the above photo are the gates which lead to staircases down to the platforms.  The next photo from 1964 is looking back at these staircases and gates.  The black arrow points to one of the skylights in the concourse.  Today this area east of the concourse is basically vacant. 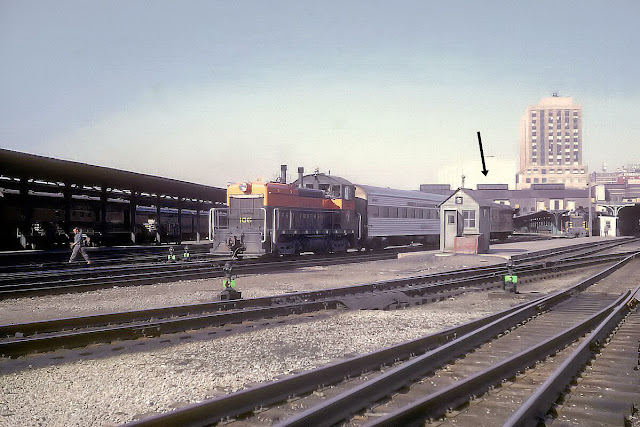 And another 1964 photo of about the same area. 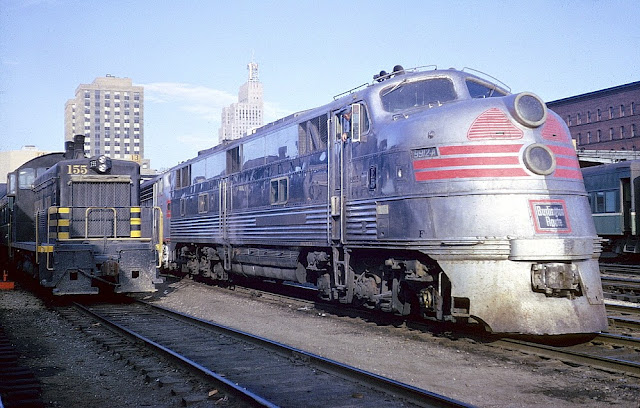 This is my daughter looking at one of the gates along the east wall of the concourse.  Both local transit and intercity buses serve some of these gates from below.  If you look all the way down at the end of the concourse you can see a gate marked "C".  That is where the only train platform, a new one, is.  Amtrak's Empire stops there. 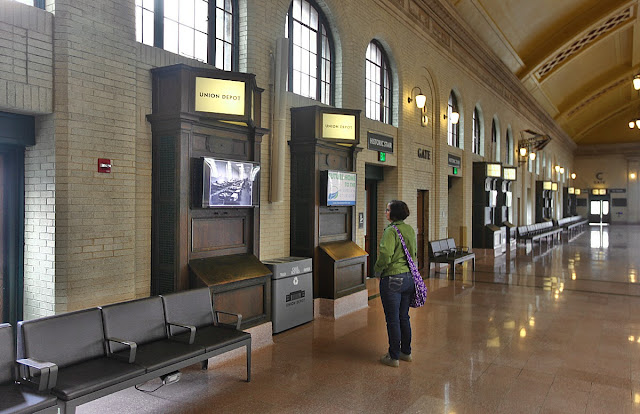 The last train to stop at SPUD was in 1971 when Amtrak was formed and moved all operations to the Great Northern Depot in Minneapolis until it moved into the Midway Station in 1978.  Amtrak came back on May 7, 2014 after the renovated SPUD was opened.

Only one of the original stair cases from the concourse down to the platforms survived.  It is along this east wall of the concourse.  I had to photograph it. 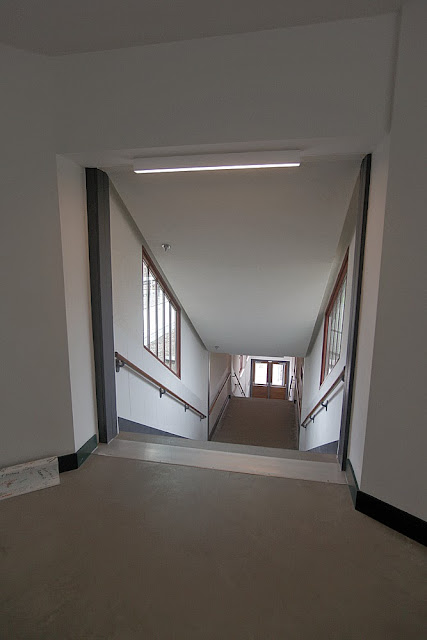 This is that gate "C" where the Empire Builder arrives and departs. 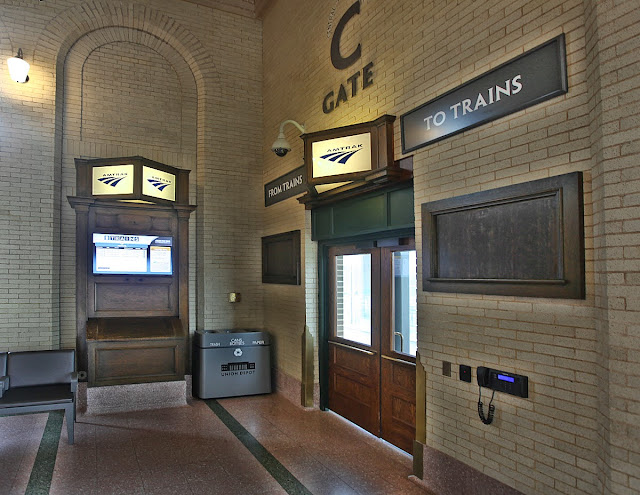 This picture was shot on Thursday from a window in the west wall of the far end of the concourse.  To the right is the ex-St. Paul Central Downtown Post Office complex.  In SPUD's hayday the depot's trains handled more than 20 million pieces of mail annually to or from the Post Office. 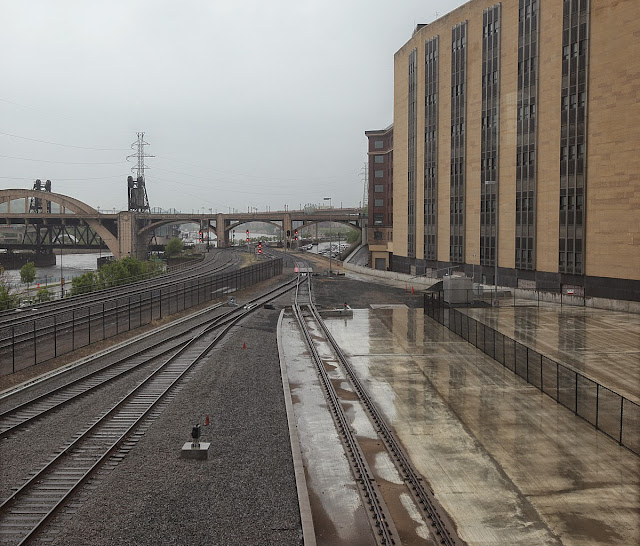 Beyond the Post Office Complex is the Robert Street Bridge over the railroad tracks and the River and just beyond it you can see the tower of the railroad bridge that crosses the River.

The next photo was taken in 1964 from the Robert Street Bridge looking back at SPUD's concourse (upper center). 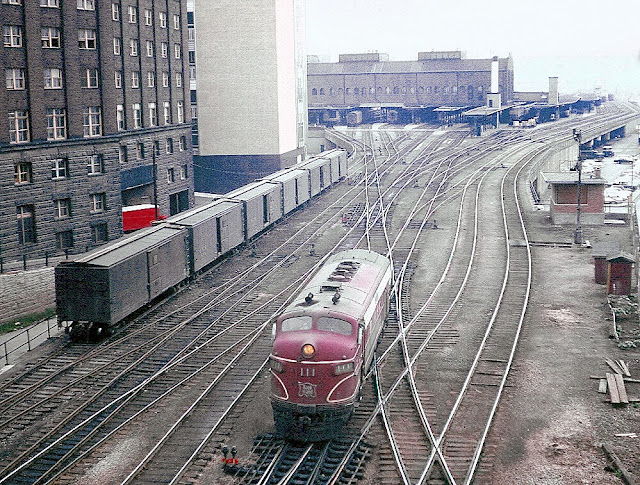 Looking back from the far south end of the concourse looking toward the headhouse on Thursday.  The west wall of the concourse has a set of murals instead of gates. That's sure a lot of floor to keep shiny. 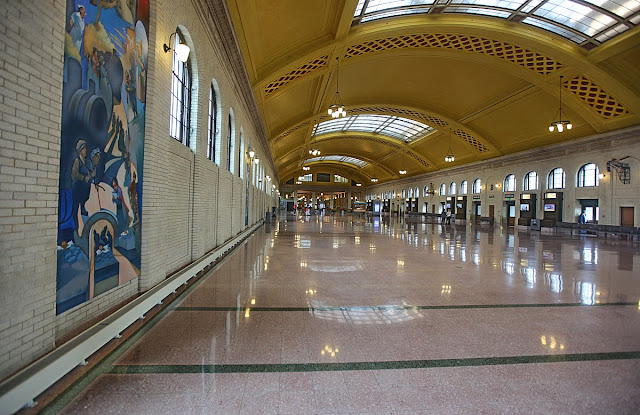 Walking back to the headhouse end of the concourse and turning around we see the the murals displayed. 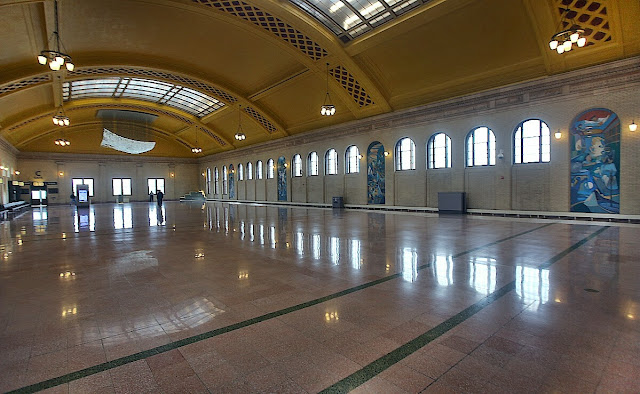 As a final note, in 1964 SPUD even had its own switch engine! 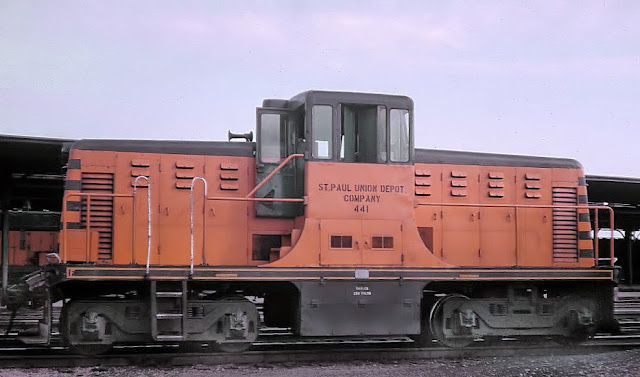 I hope you enjoyed this photo visit.

Posted by Story Behind the Pictures at 4:59 PM